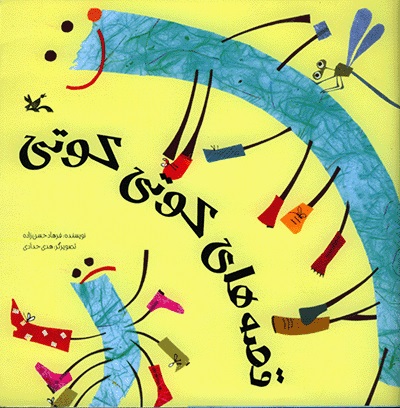 Kooti and Mooti is a millipede· He has 1000 feet and 1000 pairs of shoes. You know well, what happens if he loses its socks· Once he'd jumped down the wall, his feet ached and he groaned. "oh my feet, my feet, ..... " and once it wanted to play football, because of having so many feet. He became a gatekeeper, since no one could pass the ball through those many feet. This book is a collection of short stories based on the character of a millipede. Cooti Cooti is translated and published in Hong Kong. Also it is translated to Malay and published in Malaysia .And it is translated to English by Shaghyegh Ghanehari

(He is one of the authors of the HCAA 2018 Shortlist – IBBY). He was born in a low-income family in Abadan, 1962. His childhood and youth passed smoothly; He was absorbed in playing with friends, little discoveries, and theater. Participating in theater classes opened a new door to him. His first writing was a play in the performance of which he himself acted. Little by little he got interested in writing stories and poems. He felt I could speak out this way. But the outburst of the war between Iran and Iraq changed everything all of a sudden. He witnessed war’s destroying strokes for one whole month. He lost many friends, too. His family and he had to leave our hometown. The eight-year war changed his life entirely. From 18 years of age to 24 He did different jobs to help his father keeping the family up. Here is a list of them: photography, repairing bicycles, laboring in a textile factory, construction electric work, forging, masonry, street vending and working in a confectionary. Meanwhile he wrote stories and poems. But, it was not possible to get books published because of the war. Getting married made his life stable. And his life found a distinct direction when he decided to write the stories he made up for his little son for all children. Since then he has been writing stories and poems for children and young adults (80 books.) he has also been continuously active in different domains regarding children and young adults’ literature. He is a founder of the Iranian Association of Writers for Children and Youth and had also been a board member for two terms. He has received 30 national awards for his works, and has been selected as a candidate for the 2017 Astrid Lindgren Memorial Award.

Publisher Name:INSTITUTE FOR THE INTELLECTUAL DEVELOPMENT OF CHILDREN AND YOUNG ADULT