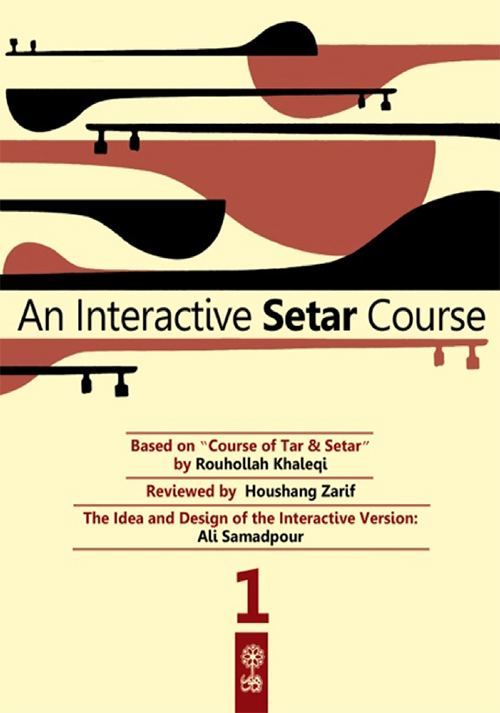 Written by: Based On a Course for Tar & Setar By Rouhollah Khaleqi
Illustrated by: Ali Samadpourmotalebi
Publisher: Mahoor Institute of Culture and Arts
Category: The Arts
Year: 2013
111 Pages,
Dimension:29x21
ISBN:979-0-802604-06-3
All rights available

This book is aimed to open the door to a method of teaching this Iranian elegant musical instrument, the Setar, to all Iranians from all over the world, and to those who are deeply interested in the Eastern musical culture. And that’s the reason why the book is in two languages, English and Persian. There are certainly other methods of teaching the Setar which we hope to publish in the near future. This method has been devised and developed by Rouhollah Khaleqi in collaboration with Mousa Maroufi and Nasrollah Zarrin-Panjeh for the first-year students of Iran’s National School of Music. Hossein Alizadeh, a then student of this school, has played the lessons.

Rūhollāh Khāleqi (Persian: روح‌الله خالقی‬‎, Ruhollâ Xâleqi; born 1906 in Kerman, Iran – 12 November 1965 in Salzburg, Austria), also spelled as Khaleghi, was a prominent Iranian musician, composer, conductor and author. Ruhollah Khāleghi was born in Mahan, a small town near Kerman, in a musically minded family. He first became acquainted with the tar, but later started to learn to play the violin. As soon as Ali-Naqi Vaziri established his School of Music, Khāleghi left school and joined Vaziri's school, where he studied for eight years. Soon he became his master's assistant and was placed in charge of teaching music theory. He later continued his education and obtained a BA degree in Persian Language and Literature from the University of Tehran. n 1944 Khāleghi established the National Music Society and in 1949,[1] thanks to the efforts of this great artist, the School of National Music was founded. After his first journey to the former U.S.S.R. in 1955, he became involved in the Iran-Soviet Society and was selected as a member of its board of directors. He also began to serve as the director of the Payām-e-Novin Magazine. His work, The History of Persian Music, which was published in two volumes, took shape during these years. His other published works include: Harmony of Western Music, Theory of Eastern Music, and Theory of Persian Music. For many years Khāleghi worked as a musical advisor for Radio Iran and was one of the founders of the program known as Gol'hā (Flowers). He also conducted the Gol'hā Orchestra, for which he composed many pieces and revised the original compositions of his contemporaries as well as older masters, such as Āref and Sheydā. Although revised, the compositions retained all their original characteristics. Khāleghi's compositions are not limited to what he wrote for Gol'hā. In addition to such masterpieces as Mey-e Nāb (Pure Wine), Āh-e Sahar (Sigh at Dawn), Hālā Cherā (Why Now?), and Chang-e Rudaki (Rudaki's Harp), he composed many other lyrical pieces and hymns, which were mostly patriotic. These include such works as Ey Iran (see Gholām-Hossein Banān) and the Hymn for Azarbaijan. Khāleghi established The National Music Society and Persian National Music Conservatory in 1949 in Tehran. He believed Persian classical music must turn into a polyphonic music to become more attractive. He died in 1965 in Salzburg, Austria and was buried in Zahir o-dowleh cemetery, Darband, Tehran.