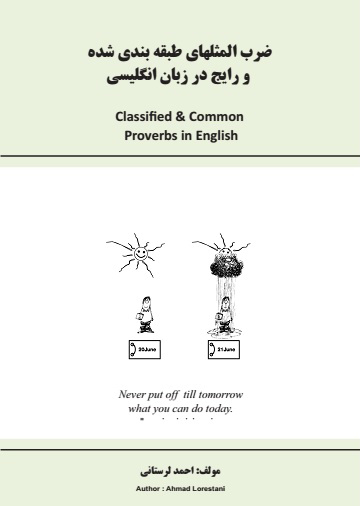 Proverbs are short and unique but comprehensive sayings which originally find their roots in the history or the background of a nation and also are derived from the culture, arts and the richness of the language of such a nation. Proverbs also refer to the realities, moralities, advice, awareness and thoughts of the ancestors which are reflectively manifested through scoffing, Satire, laughter, metaphor, allusion and poetic talks and value(s) transferred, generation after generation. The oxford dictionary 2001 also defines a proverb as: “a well- known phrase or sentence that gives advice or says something That is generally true; e.g.: waste not want not”. In this Book: In this collection proverbs are compiled and classified into different titles which themselves are presented based on their applications and the sort of messages they contain and convey. of course some of them are specially peculiar to one culture or a given language while also used by other nations as well. Some proverbs are the same syntactically and semantically in both first language and second language. “e.g.: all are not thieves that dog bark at”. In comparison, some other proverbs have different structures and meanings but they have an equivalent in the first language; “e.g.: he is more catholic than the pop ”. Noticeably, other group of proverbs have no equivalent in the first language and are quite specific by themselves and simply have to be translated into another language; “e.g.: a small spark makes a great fire”. To further motivate learners of English language all the pictures, according to relevant titles, have been designed.