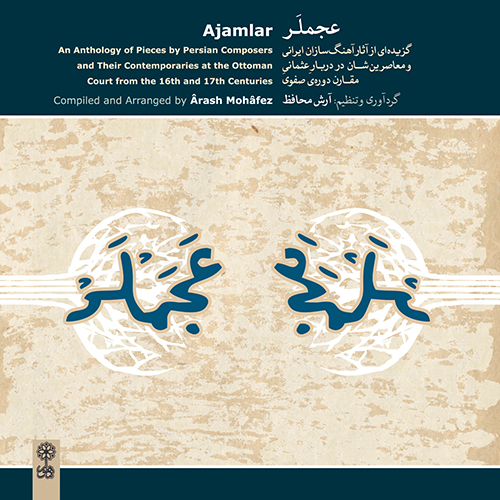 Ajamlar Publish Year : 2013 An Anthology of Pieces by Persian Composers and their Contemporaries at Ottoman Court from the 16th and 17th Centuries Compiled and arranged by Ârash Mohâfez M. CD 359 This album is an anthology of outstanding oeuvres attributed to Persian musicians and composers - contemporary to Safavid period - who are apparently gone or brought by the Ottoman sultans to the Ottoman empire and then continued their artistic activities in Istanbul court. In two Ottoman manuscripts written by Ali Ufki and Demetrius Cantemir belonging to 17th and 18th centuries, one part of these oeuvres are recorded and transcribed (in two different ways) under the names of more or less known musicians such as Hassan Jȃn, Shȃh Qoli and Changi Ja'far, and the other part under the general titles like Ajami, Ajamlar, Ajamiyȃn, etc. Most of the anonymous Ajami compositions might be a bit older than the oeuvres of the first group; it seems that they belong rather to the waves of Iranian musicians entry into Ottoman Empire in 16th century, also it's likely possible that some of these group's compositions may come from older repertoires so they are not necessarily "composed" by these Persian immigrants or captives but just "transmitted" by them. All these musical works are in Pishrôw form and they are composed in various maqȃm-s, often on complicated rhythms - like 14, 48 or even 88 beat - and with a very systematic and rich style. In present collection, in addition to an anthology of Ajami repertoire, some pieces belonging to the known or anonymous non-Persian composers of the same historical period which their technical features show some similarities to the Ajami style are also played as the examples of the connection between the old Persian and Ottoman music. The strategy of present project in the performance of old transcriptions - from one side in order to make this music "usable" for today Iranian auditor, and from other side in order to make these compositions "absorbable" into the current Persian classical music's styles and repertoires - is more based on a "practical translation" of these pieces into Persian classical music aesthetics by means of musicological and historical documentation than an effort for "exact reconstruction" of the oeuvres as they were performed at their own time which we don't know the exact details yet. This Album is played by Ârash Mohȃfez, Farid Kheradmand, Behnȃz Behnȃmniȃ, Ehsȃn Âbedi, Amir Sharifi, Shivȃ Âbedi, Farshȃd Tavakoli, Bahȃreh Fayȃzi and Âsȃreh Shekȃrchi.