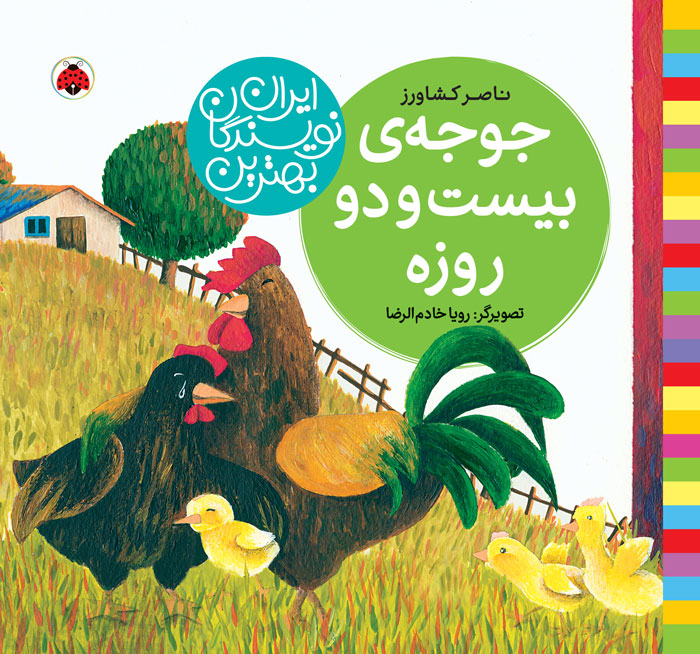 Nasser Keshavarz, poet and writer, was born in April 1962 in Tehran. Keshavarz began his professional career by publishing his poems in children’s press and gradually became one of the successful children’s and young adult poets. Keshavarz has published numerous titles in this field, and the anthology of his poems is one of the best-selling works in Iranian children’s and young adult literature. Some of his poems are included in textbooks and are taught at school in Iran. Keshavarz tries to use all of his senses in his poetry and write them in a language that children can understand, so that the children can also experiment these feelings and his discoveries. Childlike playfulness is one of the features of his poetry, showing up both in form and in his view of the world around him. Selected Works: The Crow Doesn’t Know (1998), Peydayesh The Cat Handed Me a Meow (1999), Ofogh The Human and the Butterfly (1999), Behnashar (Parvaneh) This Way Please Just Hush! (2004), Behnashar (Parvaneh) The Fish Handed Me Water (2005), Ofogh Better than a Petal (2012), Soroush Pootka and Pootka(2012), Chekkeh Honk and Walk (2013), Amirkabir (Shokoofeh) I Went Up and Came Down (2013), Chekkeh Your Father’s Moustache Is Spinning (2013), Zaffarani Selected Awards and Recognitions: Islamic Republic of Iran’s Book of the Year Award, Best Book Award from The Children’s and Young Adult Book Festival, the Golden Moon Award of the Iranian Association of Writers for Children and Youth recognizing the best Iranian poets in two decades.