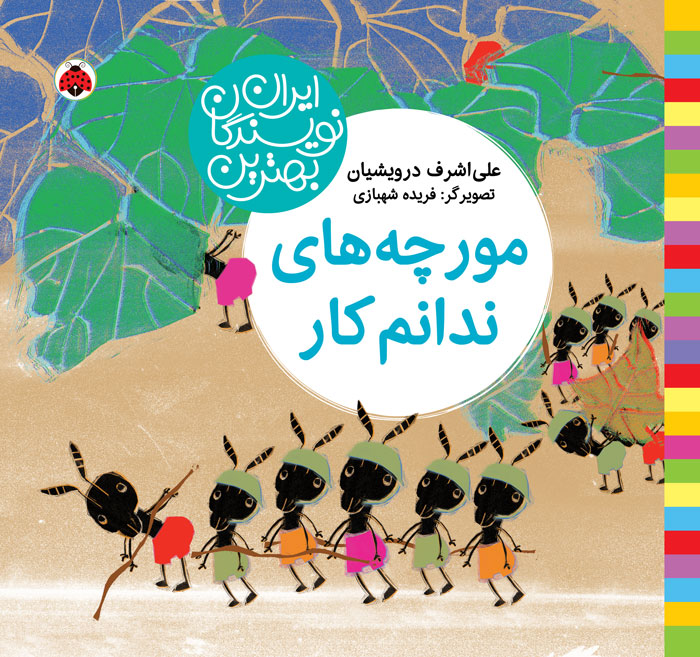 ‘The Improvident Ants’ is the story of some ants eating all aphids they find, instead of saving them for the winter and don’t take a blind bit of notice to their fellow’s warning. As a result they go hungry in the winter. The ants look awfully regretful but there is nothing left to eat. The best Iranian Writers’ series consists of 30 books of which 18 have been published. The series which is a sort of an encyclopedia of noted Iranian writers and illustrators, opens with brief biographies and reviews on their works.

Ali Ashraf Darvishian 1941 – 2017 was an Iranian story writer and scholar. After finishing teacher-training college, he would teach at the poverty-stricken villages of Gilan-e-Gharb and Shah Abad (nowadays called Islam Abad). This atmosphere is featured in most of his stories. His own life situation, as well as the experiences that he had from his teaching in those poor areas, was the inspiration for his literary works and also made him a critic of the political and social situation of Iran. Later, he moved to Tehran and continued his studies in Persian literature. As of 2006, Ali Ashraf Darvishian was in Australia as a guest of the Iranian Centre for Democracy and presented a number of lectures on a broad range of social and cultural issues.