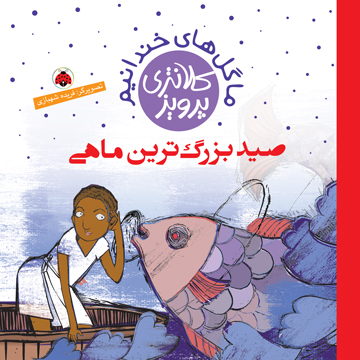 ‘Catching the Biggest Fish’ tells the story of a boy living in the south of Iran, who goes to sea with his father to catch the biggest fish of all. One day, after catching many small fish, the biggest one gets caught in the boy’s hook. But the fish wails that if he lets it go, he’s given a great treasure. The boy feels sorry for the fish and lets it go. As he tells his grandma what happened during the day, she gives him the jewelry box of her own as a gift. ‘We Are Smiling Flowers’ collection consists of five stories, each occurring in a different Iranian region. Parviz Kalantari, the author, was among the most admired Iranian writers and illustrators. He was mainly concerned with the various Iranian cultures, trying to show his readers Iranian ethnics’ beautifully distinctive life styles.

He was born in 1931 and died in 2016. He was a painter, designer, writer, contemporary Iranian journalist and a renowned modern Persian painter. Many of the familiar paintings for schoolchildren, especially in the textbooks of the old system of education such as Roubah-va-Khorous (The Fox and the Rooster), Choupan-e-Dorough-Goo (The Liar Shepherd), Hasanak-Kojaei (Hasanak Where Are You), Morghabi-ha-va-Laakposht (The Ducks and the Turtle) and Roubah-va-Zaagh (The Fox and the raven) were among his works. His parents were from the city of Taleqan, but due to his father’s occupation, they lived in the city of Zanjan for many years, and Parviz was born in Zanjan and lived there until the age of three. He showed his interest in the colours since childhood, and according to himself, he started practising the abstract painting by drawing on the walls of the neighbours’ houses. He studied at Alameh Elementry School and Sharaf High School in Tehran. In 1951, Kalantari entered the University of Tehran’s Faculty of Fine Arts and received his Bachelor of Arts degree in 1959. He then joined the Franklin Book Program and became the publisher of educational textbooks and magazines; thus, he started working on textbook illustrations. In 1955, Kalantari was employed by the Planning and Budget Organization and continued working there until 1968, when he was transferred to the Institute for the Intellectual Development of Children and Young Adults. He started a new era in his artistic life by starting the Cobb paintings (Kahgel; building material made of clay), and he has continued until the last day of his life. His works have a tangible display of the lives of the desert and coastal people. He is well-known mostly for his Cobb paintings, and even many people consider him as the founder of the style of Cobb paintings but, according to himself, Marcos Gregorian was the first one to do this. Unlike Gregorian’s style which was wholly abstract and modern, Kalantari’s style is gentler and more natural. “I am the painter of the sandy landscapes of my homeland”, he says. That is why he pictured the rustic and native spaces and symbols in most of his works. He was also one of the celebrated artists of the Saqqakhaneh School of Art. He also contributed to writing and journalism and published several series of stories. Several of his artistic articles have also been published on the relationships between Iranian art and artists in Iranian publications. Kalantari worked at art centres, including the Tehran University’s Faculty of Fine Arts and the Children’s Art College in California. During a period, he was the director of Institute for the Intellectual Development of Children and Young Adults. He participated in several groups and individual exhibitions inside and outside of Iran. One of the artworks created by this outstanding painter has been printed on a particular UN Stamps List. Furthermore, his well-known Persian City artwork is in the UN headquarters in Nairobi.